If not for the support of Vermonters like you, we would not be able to continue advocating for issues that are important to you. If you support our goals, please support our work: campaignforvermont.org/donate-now

Budget
The vote extension tossed out by the Legislature was significant because without it school boards had to warn their budgets by last Friday in order to hold a Town Meeting Day vote. The Governor’s budget proposal relies on school budgets being level funded. As it stands, the tax department is estimating 3.2% growth in spending. There are several scenarios that could play out from this vote:

There seems to be interest from the legislature in pushing the implementation date out a year to give school boards time to comply, but there is no support for pushing level funding onto them so quickly. This, however, leaves the issue of the remaining $35 million hole in the General Fund. There are few places to go in the state budget with that kind of cash, and the Education Fund is one of them.

Ethics
Two ethics bills were introduced in the House this week in preparation for the Senate ethics bill, which is likely to be voted out on tomorrow (Tuesday). While it is expected to pass the Senate with an overwhelming vote, there is already vocal opposition from members of the House committee that will review it. Sticking points are financial disclosures for public officials and an independent ethics commission.

Vermont is one of three states in the country with no laws governing the conduct of public officials. We receive an F in government accountability from the Center for Public Integrity and have one of the highest embezzlement rates in the country, many instances of which are public officials! You can join the conversation to urge the committee to pass strong and enforceable ethics standards.

You can find out even more about what is going on inside the Montpelier bubble by subscribing to our Legislative Updates: 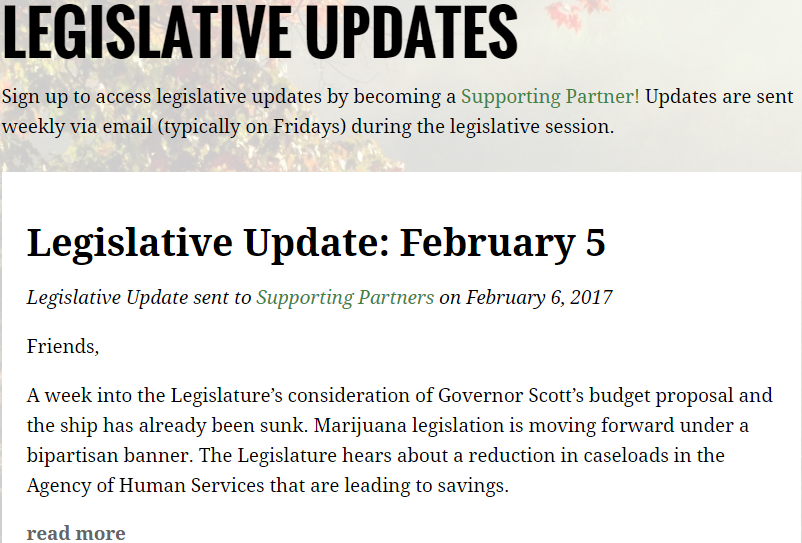