Governor Scott has one day left to decide what do with S.22, the Marijuana legalization bill. The Senate sent the bill to Scott last Thursday starting a countdown that ends at close of business tomorrow.

Burlington, VT – Campaign for Vermont Prosperity (CFV) concluded a four year legislative campaign last week when the House and Senate approved the final version of S.8, a bill creating a state ethics commission and standards of conduct for public officials. “This is a significant step forward,” said CFV Executive Director Ben Kinsley, “we have been fighting for this for years and the Legislature has been slow to act,” referring to a 2013 report the organization issued calling for the creation of ethics laws for public officials.

When the Vermont House took a final vote on S.8, the bill making Vermont the 48th state in the country to pass ethics laws, there were 24 lawmakers who voted against it. While we don't make any assumptions about the reasons these lawmakers chose to vote against government ethics, we do believe it raises questions about their commitment to a transparent and accountable government. We encourage voters to contact the Legislators below for an explanation.

Several weeks ago we launched a campaign to support our report on Re-Energizing Vermont's Public Education System with a goal to raise $10,000 before the end of the legislative session. I am happy to say that we broke that threshold this week, with just a few days left in the session. However, the Legislature has been reluctant to move forward with this plan.

In order to realize meaningful savings for Vermont property taxpayers we must extend our legislative campaign through the summer and set a new fundraising target of $18,000. We need your help to make this happen, extending our advocacy for an innovative plan that could save taxpayers $350 million.

Here is why you should support the initiative...

First, we would like to thank you and your committee for the considerable amount of time you have put into S.8. As you are well aware, ethics legislation can become complicated as you get into the nuts and bolts of it.

Originally appeared in the Caledonian Record on April 19, 2017

While the Vermont Legislature has been grappling with Vermont’s shrinking student enrollment with heavy handed mandates like Act 46, which in some school districts will do more harm than good, the Campaign for Vermont has put a more creative and more promising proposal on the table. Issued March 23rd and entitled “Re-Energizing Vermont’s Public Education System: Making Vermont an Education Destination” the proposal calls for Vermont to become more active in recruiting international exchange students. 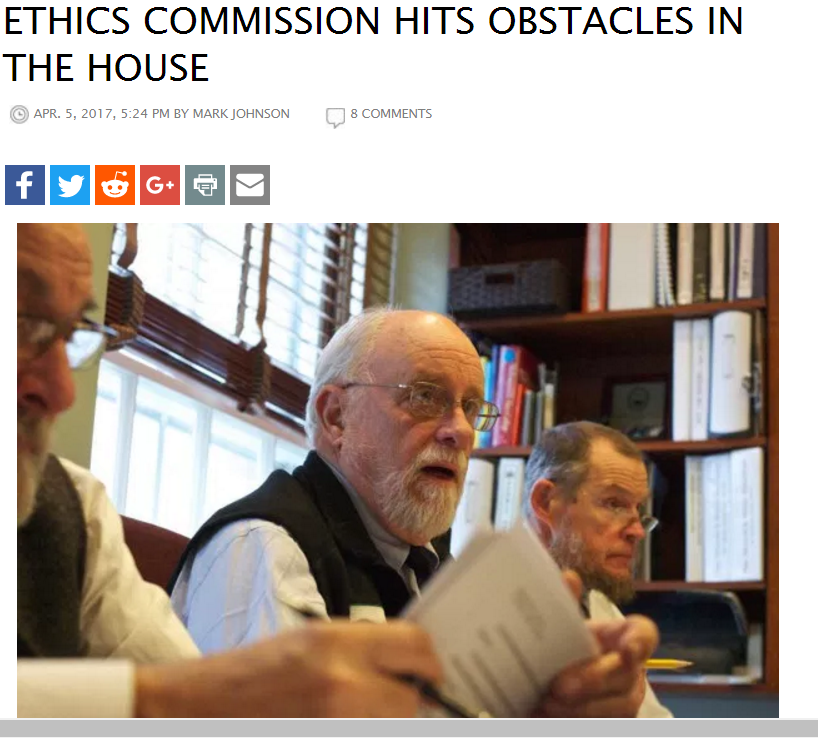 Ethics legislation hit a roadblock in the House on Wednesday when Representative David Deen mislead lawmakers about what was contained in S.8. He cautioned lawmakers to resist independent ethics oversight. We pushed back, but we need your help to make sure Vermont enacts meaningful ethics reform!
Read more
posted by Ben Kinsley | 920.20pt
April 09, 2017
Comment Share

As the committee has dug into S.8 you have discovered that perhaps some of these ethics issues are not quite as simple as they first appeared. In my previous testimony I said that an ethics commission must be independent, nonpartisan, and quasi-judicial to act as a meaningful enforcement mechanism.

After yesterday’s testimony there were a number of questions about the jurisdiction of an ethics commission and where the line is for separation of powers between the Legislative and Executive Branch. This is a question that has been debated for a few years now and the Secretary of State, CFV, VPIRG, and others had argued that there are ways to handle perceived delegation of power issue.

Bill Mathis again made headlines amid controversy last week when he was elected as vice-chair of the State Board of Education (SBE). Two new members of the board voted against him because of his involvement in proposed changes to how the state treats independent schools.

This argument, however, misses a more important point. In January, a group of independent legislators questioned whether Mathis’ employment at a national education research group that received funding from teachers unions violated the Vermont Executive Code of Ethics. “Much of the work conducted by the NEPC – including materials authored by Dr. Mathis – have direct bearing on public policy matters before the SBE,” they wrote.