S.234 was billed as an overhaul to Act 250, however most land-use and development experts agreed that it fell well short of holistic reform. That being said, the bill did strive to make improvements in key areas relative to housing, but even on this front it drew criticism from mayors and town administrators across the state.

It even took heat from Miro Weinberger who said it, "would take us backwards and undo one of the most important pro-housing state land use reforms of the past 20 years." 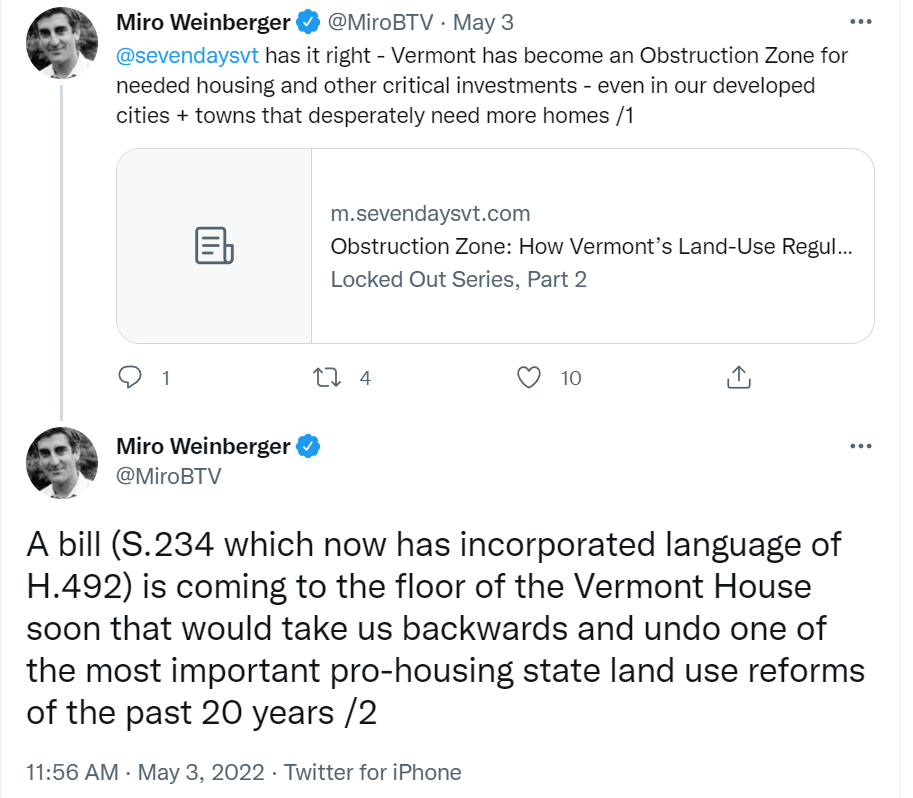 In furthering our vision of an informed and active electorate, we are providing summaries of key bills considered during the 2022 legislative session. S.234 is one of these.

The bill would have done a number of things in the following areas:

Updates From the Last 6 Weeks of the Legislative Session

Sabina Haskell (Chair, Natural Resources Board) reiterated to the House Natural Resources Committee that the Administration does not support S.234 on Friday. She outlined the same objections they did in the Senate - generally they don't view this as the comprehensive reform bill they asked for and they want more supports for processing applications. Out of 500 permit application in 2021, they issued 442 permit decisions. She added that, “speaking on behalf of the staff at the NRB, we find the added criteria and expected increase in Act 250 applications and jurisdictional decisions is really daunting.”

The Committee pushed back on the Administrations resistance to supporting the bill, pointing to forest blocks and the road rule provisions as supporting the environmental protection that the NRB is supposed to support. Haskell said she would respond in writing to those two issues as there are "better ways" to approach than the bill offers.

One advocate repeatedly criticized the NRB for “failing to do its job and promulgate rules for the implementation and definition of Criteria” around land use development plans and criticized the road rule and forest block provisions in the bill as not going far enough. Essentially the argument being that any subdivision of land equates to forest fragmentation (a tenuous argument). There was general agreement among advocates that small towns without detailed sophisticated planning and zoning need state supervision of land use permitting via Act 250, especially with regards forest conservation overlays.

There were concerns raised by Committee members about those two provisions impact on the forest products industry and the activity that it might curtail outside of development.

The Vermont Planners Association opposes both the road rule and forest block provisions. The road rule provision, they argue, would lead to roads and driveways with steeper grades that will increase erosion. The current forest block definitions are too broad and not well defined. However, they do support many of the Act 250 changes proposed in this bill and S.226 around housing developments.

The House Natural Resources Committee did a section-by-section walk-through of S.234 on Thursday. There were few changes to the bill following testimony earlier in the week. However, it seems like the Committee might strike the existing forest block language in favor of making it explicit that forest fragmentation should be a consideration that the Agency of Natural Resources takes into account when they are doing their permit review. They do this now but there is no requirement in statute, so this would make it explicit. This would also allow for better and more flexible outcomes without being too prescriptive.

The Committee questioned the thresholds that the Senate put in place for the road rule. They seem more interested in a straight 2,000 foot trigger. There was also some discussion about the difference between a road or a driveway (driveways only service one or two homes per court rulings).

The Committee came back to the bill on Friday and it became clear there was discomfort with leaving the definitions of forest blocks up to the Natural Resources Board (NRB). They asked legislative counsel to come back with the language from H.233 from 2017 to review.

There was some debate about hours of operations limits for some (largely forest products) businesses because of noise impacts on habitat. While there was agreement that activity should be limited, they couldn't agree on which activities should be allowed (such as deliveries, etc.). The Committee plans to have the Secretary of the Agency of Natural Resources (ANR) and the Chair of the NRB testify before moving forward.

However, Representative Bongartz argued that all these problems are here “because we have had a dysfunctional NRB for decades.” He says that, "everyone wants the working landscape to be successful and that is what Act 250 is for."

Legislative Counsel provided a side-by-side of the 2017 bill and S.234. The Committee seemed to favor the language from the older bill. While the House language is still being drafted, the Senate version sought to limit the ability to sub-divide plots of land. The House does seem interested in keeping this provision which could severely curtain the development of single-family homes.

The House Natural Resources Committee spent the week reviewing S.234 in preparation for passage. The Committee struck a requirement that Priority Housing Projects (PHPs) be located within a Neighborhood Development District (NDA). Also struck was an exemption for permit amendments for projects within NDA's but they offset this with an expanded exemption for PHP's located within Downtown Development Areas.

One of the significant changes this bill allows for is qualifying mixed-use construction projects as PHP's. However, the square footage must be 40% residential and 20% of the housing units are required to be "affordable." The same concerns that surfaced in the Senate around units only being required to be maintained as "affordable" for 15 years resurfaced here. Several Committee members would prefer that those units remain "affordable" in perpetuity. They ended up addressing this later on through S.226.

They agreed to add language that encourages environmental impacts and forest fragmentation to be "avoided, minimized, or mitigated" during the Agency of Natural Resources review of the permit applications. This addressed one of the Governor's concerns in his veto threat from a couple weeks ago. It seems like there is an inclination towards merging language from S.226 and H.926 into S.234 as the vehicle for passage. This might make a veto harder to swallow if veto-worth provisions like the road rule and forest fragmentation are bundled with some of the Housing provisions the administration wants.

Chairwoman Sheldon was adamant about preventing subdivisions above 1500 feet in elevation, in addition to the road rule. There was little feedback from the rest of the Committee on this point.

As was the case last week, the Committee made several remarks about the Natural Resources Board (NRB) being dysfunctional. To this end, they were specifically not tasked with any reporting requirements in the bill. Instead, the bill requires the Department of Housing and Community Development to administer a report on the various designation programs, agricultural business language, and NRB staffing levels. It would also review the incentives established in existing statute for both regulatory and non-regulatory benefits. Some members want “consistency between local plans and state plans” for zoning included in the reporting requirements. It was pointed out that Regional Planning Commissions can withhold approval of the Town Plan if they do not align with state goals.

The Committee came back to markup the bill on Thursday with Jeff Wennberg (Former Commissioner of DEC) voicing support for the bill, particularly the sections that remove duplicate permitting for PHPs around wastewater (only the municipal permit would be required). He believes this streamlines the application process without any meaningful reduction in environmental outcomes for the state. There was also concern that the Department of Environmental Conservation was overloaded and that removing these permits from their workflow would allow for more productive endeavors.

They came back around to adding some language from S.226 into the bill, such as the Accessory Dwelling Units (ADU) sections. The Senate wanted to tamp down on some excessive municipal requirements that discouraged the creation of ADUs, which you can think of as housing units like in-law apartments. Many of these have been used for permanent rental housing during the pandemic. The Committee seems like they will support this provision.

The discussion forest products restrictions on operations also resurfaced. A concept similar to manure spreading was surfaced where operators would be required to proceed according to the weather. DEC would issue the permits regulate. The alternative would be periodic reporting on activities from the forest products operators (or do nothing).

S.234 passed the House on Wednesday after two amendments were offered on the floor:

The underlying bill passed the House 99-43 and will likely appear on the Senate floor Monday.

The Senate Economic Development Committee received S.226 back from the House on Friday on a 103-42 vote. The House removed several sections on Neighborhood Development Areas because they are also included in S.234. There was also some debate about the necessity of the new housing board to oversee diversity that the House added.

The Accessory Dwelling Unit language that was in the bill is now in S.234 and the section on wastewater connection permits was removed entirely, the Committee is trying to insert those provisions into S.11 in the Conference Committee.

The important part, the missing middle home affordability grants, are still included in the bill and were unchanged from the Senate version. However, the bill also came back with a controversial provision to register all construction contractors who bid on projects greater than $10k.

Senator Sears objected on the Senate Floor to a reference in S.234 implying that the Act 250 process was not "citizen friendly." Spoiler alert, it depends on which side of the table you sit on. After much controversy, large pieces of the bill were split off into S.226. The Senate did end up eventually passing the bill on Thursday evening with a 17-13 vote, but the House failed to take it up. The provisions on downtown exemptions forest products, and land access were preserved in S.226.

Provisions on unfair housing practices, the Vermont Land Access and Opportunity Board, and several other initiatives were ported over to S.226 from S.234.

The forest block language from S.234 was struck down and the road rule provision, which the Governor had previously objected to, was not even proposed. The Senate passed the bill 30-0 on Thursday and the House Concurred later that evening. The bill will now be sent to the Governor